The phrase “I Love You To The Moon And Back” is quite trendy on social media and couples in-relationship use it to express their extreme love.

I love you to the moon and back is a metaphorical example to show the vastness of love. Because if you take this celestial phrase literally, you may find the distance between earth and moon less.

Because you have better alternatives like sun, or pluto than the moon which is just 238,855 miles away and the return journey (to the moon and back) would be around 477,710 miles.

Now the question is why specifically the moon won the race among other celestial bodies?  But before discussing that, let’s try to find the origin of this popular saying.

Origin of “I Love You To The Moon And Back” Phrase

Origin of “I Love You To The Moon And Back” is not clear but the phrase got popular in 2008 onwards.

In 2008, the popular children’s book Guess How Much I Love You by Sam McBratney got published.

Guess How Much I Love You is a modern children’s classic that narrates the story of two plush hare –  a father, and child.

In this story, the little rabbit and his father rabbit brag about how much they both love each other.

He eventually tells his kid that he loves him “to the moon and back,” to assure him that his father loves him so much that it is almost limitless.

Now coming to the logic behind I love you to the moon and back.

The Logic Behind “I Love You To The Moon And Back”

According to science your heart pumps enough energy to drive a truck 20 miles which is equivalent to driving to the moon and back in the lifetime journey.

Let’s dig deep further to understand the logic behind.

Total distance of going to moon and back as we discussed earlier is around 477,700 miles.

Which is very much close to the average human life expectancy on earth. And if you are a male, you should be happy as you would still have around 2 years to live happily with your partner. Lol.

So now it’s clear that I love you to the moon and back means loving you to the lifetime.

Also read – Signs he is making love to you

No doubt lovebirds have popularized I love you to the moon and back phrase so much. But originally, the phrase was started between a father and a son.

So ultimately, you can use this phrase between parents and children, close friends and family, lovers and even pets to express your limitless love. 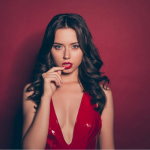